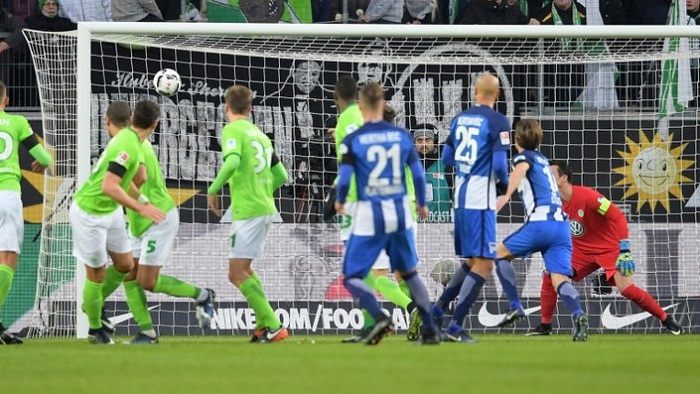 Although this clash will not be the main feature of this particular round, it will surely unite thousands of German football fans in watching the match either at the Berlin stadium or at home on their TV screens. Read on for a detailed analysis of the upcoming Hertha vs. Wolfsburg match compiled by our experts.

Football. German Bundesliga
Kick-off: February 02, 2019; 17:30
Venue: Olympic Stadium, Berlin
Prediction: Both to Score
Best odds: 1.73* (WilliamHill)
(*the odds may be subject to change closer to the beginning of the match)

Right now, Dardai’s team can only boast of clenching 28 points in 19 matches of the German Championship. Furthermore, the Berliners are 3 points behind the 5th position spot and are ahead of Wolfsburg only by additional indicators.

This makes the upcoming head-to-head confrontation even more interesting and fundamental. Recently Hertha tied with Gelsenkirchen Schalke 04 (2:2) and they are now firmly committed to getting 3 points in the next match.

Hertha’s playstyle in the current season leaves a mixed impression – they score often, but concede a lot as well (31-30).

Hertha is considered to be a favorite in the upcoming battle, largely due to the fact that the Berlin club will play at their home stadium.

In contrast to their opponent, Wolfsburg did not have the best start to the season but managed to significantly improve their standing later on.

The Wolves are now in the 8th position of the German championship, having won 28 points in 19 Bundesliga matches.

The playstyle of Bruno Labbadi’s squad, however, leaves some questions. In fact, they are quite good in attack, but extremely unstable in defense, which leads to numerous conceded goals.

Before this skirmish, Wolfsburg was defeated by Bayer (0:3) and as a result will now try to put their best foot forward in the forthcoming confrontation to redeem themselves in the eyes of their fans.

Without significant injuries or suspensions, Wolfsburg are going to field their strongest possible squad and get three points in the next clash.

Our prediction for Hertha vs. Wolfsburg is that Both teams are to Score because:

As seen from all pre-match predictions, both teams will score at least a goal against their opponent. Therefore, our bet has the best chance of success.