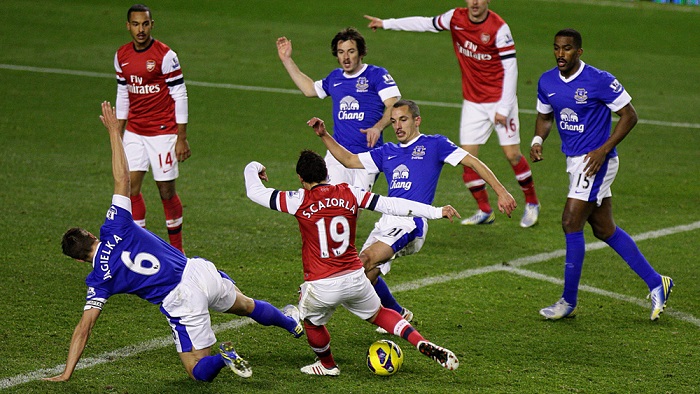 It will be really difficult for Everton to beat Arsenal team that’s currently firing on all cylinders, but there is no doubt that the “toffees” will do everything possible to achieve a victorious result.

Everton quite ambiguously hold the current season and the best proof is their interim EPL results.

Right now Liverpool occupy only 10th position in the Premier League table, having won 43 points after 32 matches played. It is noteworthy that Everton are already 18 points behind the European Cup zone and their supporters are clearly not happy with that.

The situation is no better with the game itself. Both attacking and defensive skills of the team are pretty weak. The only thing is that Everton play much better at home matches compared to away ones.

Playing at their home stadium may be a small trump card because the team is clearly not a favorite in this duel. All the key players are now in the ranks and will be able to play in the next match, which also adds a bit of optimism.

Everton players feel themselves quite well before the clash since they defeated West Ham 0-2 a few days ago.

Arsenal got not the very best start this season, but Unai Emery managed to greatly improve their standings closer to the finish.

Londoners are currently in the 4th spot in the EPL and only 1 point behind the 3rd Tottenham.

They are marked by great attacking abilities. The team almost never leaves the field without 1-2 goals scored. However, they also concede a lot as for one of the EPL leaders.

Unai Emery’s squad is a clear favorite in the upcoming match. But the team performs much weaker at away games, which should come in handy for Everton.

Arsenal players are in great mental and physical state after a confident win over Newcastle 2-0 and are ready to get a victory once more.

Our bet for the match Everton vs. Arsenal is “total over” because of several reasons:

We expect to see a spectacular as well as a high-scoring game. All pre-match deals are in favor of that.