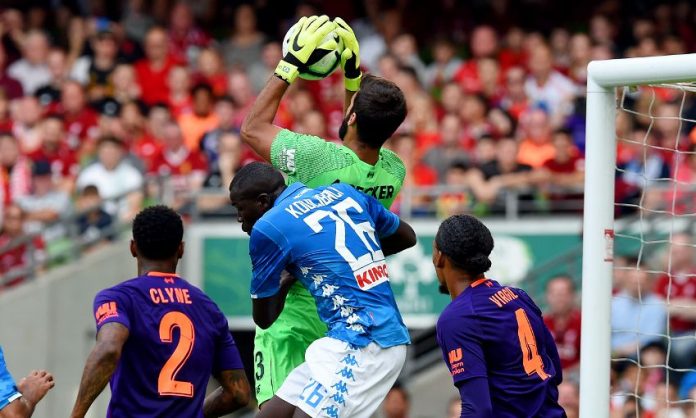 The match Napoli vs Liverpool is going to be one of the central confrontations of the second round of the Champions League. Our experts have already made up a detailed review and prediction for the forthcoming meeting.

Football. UEFA Champions League. Group stage.
Kick-off: October 03 at 22:00
Location: San Paolo, Naples
Our prediction: TO (2.5)
Best odds: @1.67* (Marathonbet)
(*odds may be subject to change closer to the beginning of the match)

Napoli did their best in the past season and deservedly ranked 2nd in the Italian championship. Contrary to experts’ expectations, they did not slow down this season as well.

For the time being, Ancelotti’s men are also the second leading in the Serie A standings with 15 points based on 7 matches played. And, indeed, such results encourage all their fans.

As for the skills, the team operates confidently in the attack while their defense is far from great (13-10). Napoli concede at least one goal in almost every match of the season.

Neapolitans are not favorites in the battle with Liverpool after a hurtful loss to Juventus (3:1). All leading bookmakers make predictions not in favor of the hosts. In view of the foregoing, this choice is easily explained.

Liverpool had a wonderful season. Their silver medals of the Champions League are eloquent proof of that. This season also works out well, it may be seen from the current results of Klopp’s team.

At the moment the Reds are going second in the Premier League table, having 19 points after 7 matches played. Furthermore, Liverpool started well in the Champions League, beating eminent PSG (3:2).

As for Liverpool’s strong points, these are powerful attack skills. They scored 18 goals in 8 matches of the season, and this is a really good indicator.

The team ended in a draw with Chelsea before the forthcoming match (1:1). Therefore, they would certainly try to show their best to live up to the trust of supporters.

Considering all the above-stated information, our bet for the match Napoli vs Liverpool is in favor of TO (2.5) due to such reasons:

Both teams practice attacking football and are in great shape. Undoubtedly, we’re waiting for an exciting clash with at least three goals scored.

If you like the prediction but the odds too low, get familiarized with the article about surebetting – an effective strategy that able to bring a stable income.