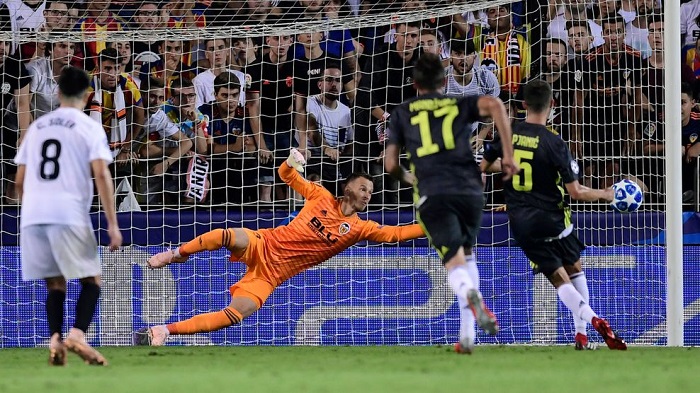 Juventus vs Valencia predictions ahead of this Champions League clash on Tuesday. Read on for our match preview and free betting tips.

Football. UEFA Champions League. Group stage
Kick-off: 27 November, 2018; 23:00
Venue: Allianz Stadium, Turin
Prediction: Both to Score (no)
Best odds: @1.74 — Marathonbet
(*the odds are relevant at the time the article is posted and subject to change before the event starts)

Juventus perfectly stood the ground and won Serie A. And now they host Valencia in the current season, still displaying excellent results:

Now they head the table with 37 points after 13 matches, being ahead of the rival by 8 points.

Juve display great attacking and defensive skills, which is vividly shown by 8 conceded goals in 13 games in Serie A. The team lost the only confrontation this season taking into account all the tournaments.

Juve had some overconfidence problems in the previous meeting, but they’ve bounced back with two victories. That concerns the victory against SPAL 2-0 as well.

They still got a chance to enter play-off, but they need to win as much points as possible against Juve and Man Utd. It certainly won’t be easy but still manageable.

Before clashing Juve, Valencia got some points over Rayo Vallecano 3-0, which surely bring them real confidence. However, this situation cannot mend the attacking issue of the team.

The prediction for Juventus vs Valencia would be in favour of one of the teams won’t score:

We’ll surely going to watch a spectacular event tonight which is going to end with Juve’s win 2-0 or even 3-0. Therefore, our bet will certainly succeed.