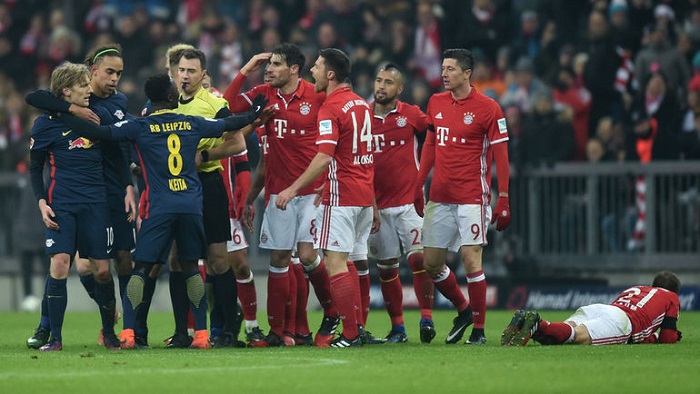 Leipzig vs Bayern prediction for Saturday’s DFB-Pokal fixture at Olympiastadion. All betting tips and predictions prepared by our experts are below.

Aspirational Leipzig may certainly add this season to their account after displaying such big-time results:

The team finished third in the Bundesliga standings, which granted them a chance to fight for the Champions League. Moreover, the team got to the Bundesliga finale to clash with Bayern Munich.

Leipzig tried to put their best faces forward and demonstrated robust defence line – only 29 conceded goals in 34 meetings, which is the best indicator among Bundesliga teams.

Rangnick’s squad obviously better performs at home (10-6-1), having only 9 shots conceded. However, the fans are hostile anticipating the upcoming duel since they understand how strong are the opponents.

Right before this clash, Leipzig yielded to Werder 2-1, though there are some distinctions: Leipzig already reached all tournament goals and letted reserve roster participate.

Niko Kovač is coming under fire this season as most experts claim the team fail to display their best under this coach. It’s fair in some way, but his men secured themselves a champion status in Bundesliga.

And now they’re up to fight for DFB-Pokal, showing their best skills including attacking proficiency of Robert Lewandowski. The squad added some points to defence as well.

We should also note that they conceded 32 and scored 88 goals in 34 matches. Bayern also trashed Eintracht 5-1 the other day, and this win got them way to the Bundesliga.

Bayern are the favorites in the forthcoming clash, but they won’t underestimate their opponent since the stakes are too high.

Today we tend to bet on TU 3.0 for RB Leipzig vs Bayern Munich:

We’re anticipating a persistent game in the center filed, which won’t contribute to numerous goal possibilities. A slight advantage of Bayern would make sense under the given circumstances.