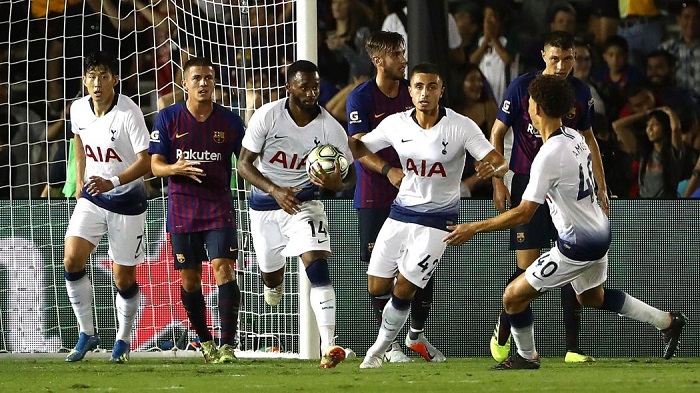 Football. UEFA Champions League. Group stage
Kick-off: 03 October; 22:00
Venue: Wembley Stadium, London
Prediction: IТO1(1.5) — Tottenham IT over 1.5
Best odds: 2.31* — Marathonbet
(*the odds are relevant at the time the article is posted and may change before the event starts)>

Ambitious Spurs got to the top-3 leaders of 2017–18 Premier League. The results were not so excellent as the game itself.

Concerning current season position, Pochettino’s men showed quite good skills as well: they now embrace the 4th place, being only 4 points away from the leading Manchester City. Right before meeting with Barcelona, the Spurs defeated Huddersfield 0-2.

The Spurs constantly improve their attacking skills: 14 goals in 7 meetings is a pretty positive result. Sure they have some defense problems but that won’t keep them from reaching our bet.

Barcelona displayed good game last year, which brought them another win in La Liga championship: 13 points away from the closest opponent Atletico Madrid.

However now Valverde’s men got to uneven success: though Barcelona lead the La Liga table, the squad have terrible defense issues.

Due to these problems Barca lost so many points to Atletico, Leganes and Girona. Two last squads consistently were giving them +2 goals. These results are quite far from being perfect, but hardly Ernesto Valverde manage to mend the situation this time with Tottenham.

Today in Tottenham Hotspur vs Barcelona we tend to believe IT in favour of the hosts will succeed:

Yes, Barcelona appear an unconditional favorite having the chance to snatch those three points. However, taking into account the prematch drill, the Spurs will have at least several possibilities to score. The squad will surely use them all to the fullest potential.